The world as of September 2022 … The following tweet (which generated a very lively discussion) references a letter sent by US Treasury to the Dutch Government.

Aug 29/22 letter from US Treasury and paragraph reinforcing US support for @citizenshiptax and #FATCA as enforc tool. #Americansabroad who are serious about solving "the problem" instead of "their problem" must aggressively support end of #CBT. Stop thinking "carveouts" will do. pic.twitter.com/C5JSqRIeu1

The letter includes statements that bear on:

– the Dutch banks and their FATCA obligations

– the US commitment to imposing US taxation on Dutch residents who happen to be US citizens.

The main point of the letter seems to be to give the Dutch banks a “Blessing From Their US Overlords” that a notice of FATCA non-compliance will not presumptively follow from allowing US citizens (who live in the Netherlands) to have basic depository accounts (to receive pay and pay bills).

But, let’s get real. Under no conceivable interpretation of the FATCA IGA could the fact of having US citizen customers (with or without SSNs) cause the Dutch banks be in noncompliance with their FATCA obligations.

The Dutch banks simply do NOT want to deal with US citizen clients.

This sentiment is entirely reasonable and is a natural consequence of US regulatory overreach. The letter from Treasury is asking that the Dutch banks accept the worst of both worlds. First, to allow Dutch residents, who happen to be US citizens, to have a bank account at a bank of their choosing. Second, to behave in a way that is contrary to the business interests of the bank (as having US citizen customers certainly is). The arrogance displayed in Treasury’s letter is sufficient reason to be wary of having US citizen clients period.

1. As per the clear terms of the US/Netherlands FATCA IGA, Dutch banks are perfectly free to exempt all “depository accounts” with balances of less than $50,000 USD from FATCA obligations.

2. Even if the Dutch banks were in breach of FATCA obligations, the breach is of no consequence unless US Treasury (A) notifies the Netherlands of that non-compliance and (B) gives them 18 months to cure the noncompliance. (It’s perfectly obvious that Treasury can simply issue a proclamation that residents of the Netherlands are exempt from FATCA. But, history indicates they are not willing to do this!) In other words: FATCA noncompliance is not the problem. It’s Treasury’s reaction to FATCA noncompliance that is the problem.

Therefore, it’s clear the reluctance to have US citizen customers is not principally motivated by a concern of FATCA noncompliance. It’s because the US Government has ensured that US citizens are “toxic (taxic) carbon life forms” and it’s better to avoid them. The “toxicity” (taxicity) is caused by US citizenship taxation – specifically the US attempt to impose worldwide taxation on US citizen Dutch residents who live and pay tax in the Netherlands. In other words: the problem is caused by US citizenship taxation and not by FATCA.

Those who have the time and interest can read the text of the FATCA IGA which confirms these points here:

So, to be clear: The Dutch banks can and always could allow US citizens to have depository accounts (to accept pay and pay bills). They just don’t want to.

The letter from Treasury does NOT say that:

The Letter DOES say that: 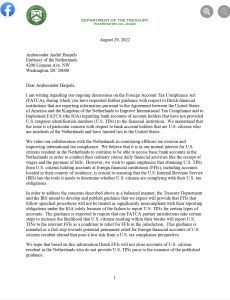 – Treasury expects to provide guidance that allow Dutch banks to avoid FATCA non-compliance because of a failure to provide US TINs in certain circumstance. But, this relief is to be conditioned on the Netherlands taking proactive steps to pressure US citizens resident in the Netherland to provide TINs to the bank. (Sounds as though the Dutch Government will be required to become directly involved).There will be a “quid pro quo”. (third paragraph)

The primary message from US Treasury is in the second paragraph:

To Repeat: Citizenship taxation isn’t everything! It’s the only thing!

The only solution to all the FATCA related problems is for the US to end citizenship taxation and STOP claiming the tax residents of other countries as US tax residents.

Advocacy from individuals: Yet, almost no groups or individual are willing to unite around the simple principle of severing citizenship from US tax residency. It’s difficult to understand why.* (See Appendix)

Advocacy from governments: To add insult to injury, the Dutch Government is unwilling to challenge the US assumption that the US is free to claim Dutch tax residents as US tax residents. (The Dutch Government might encourage US Treasury to exercise its statutory right/obligation under IRC 7701(a)(50)(B) to provide relief for certain dual citizens.)

There can be no meaningful relief for Americans abroad as long as (1) US citizenship taxation remains in force and/or (2) The Governments (including the Dutch Government) allow the United States to claim their tax residents as US tax residents. (As Nancy Reagan said: “Just say no!)

It will be interesting to see what steps the Dutch Government will take to “encourage US citizens resident in the Netherlands” to provide a US TIN to the Dutch banks. Perhaps they should ask that some of the new IRS agents be stationed in the Netherlands. (But, then those IRS agents would become Americans abroad too.)

The tragedy is that Americans abroad will not unite around the simple principle that citizenship must be severed from US tax residency. Very odd indeed.

As Benjamin Franklin is rumoured to have said:

“If we don’t hang together we will hang separately.”

Yet, the vast majority are attempting to find a solution to “their problem” (banking access, FATCA, GILTI, etc.) and not end “the problem” (citizenship taxation).

That’s the FATCA of the matter!

*Appendix – IRS Collection Of Delinquent Tax Debts On Citizens Of France, Netherlands, Canada, Denmark and Sweden Who Are Residents Of Their Country Of Dual Citizenship

Precisely, for a US/French citizen to have @dualcitizenship protection from IRS enforcement he/she must have @taxresidency in France or a US/Dutch citizen tax residency in Netherlands, etc. Here is an old post with insightful comments on this topic: https://t.co/qAs0lM1Z2u

As this post old post from The Isaac Brock Society discusses there are five countries where dual citizens have treaty protection from certain US tax debt enforcement. These countries are France, Netherlands, Canada, Sweden and Denmark. A very large number of US citizens in France, Netherlands and Canada have dual citizenship and therefore have certain protections from enforcement of US tax liabilities. Does this contribute to a belief that citizenship taxation doesn’t matter to US citizens (including accidental Americans) resident in those countries? One doesn’t know, but here is a fantastic comment from that Brock post:

Colleagues and I have written on this subject over the years. I have also noted that the IRS and the State Department seem not in accord as to the effect of judicial retroactive restoration of citizenship (Afroyim, Terrazas, etc.): internatrional law seems not to allow nonconsensual attribution of citizenship other than at a time of birth, adoption or (less commonly now) marriage. In the past, certain Argentine and Isaraeli laws have been called into question and changed. It seems to me that the IRS does not pursue persons with doubtful nationality status, although in the current culture that hasn’t stopped banks from at least initially refusing accounts from some who lost, or never had, US nationality but do not possess a CLN. The pesumption of alienage upon birth abroad is alive and well, whatever the personal views of some border guards, and the difficult issues of proof of facts are discussed in Vice Consul Amelia Shaw’s article: http://www.afsa.org/citizenship-and-unwed-border-moms-misfortune-geography

The case of Danish tennis player Torben Dilling is well-known and discussed, among other places, here:
http://procedurallytaxing.com/why-is-the-irs-collecting-taxes-for-denmark-2/

The curious 1989 cross-border collection case you allude to is Van deMark v. Toronto-Dominion Bank and can be found here:
http://uniset.ca/other/cs6/68OR2d379.html
It’s wideley discussed on the Internet:
https://duckduckgo.com/?q=Van+deMark+v.+Toronto-Dominion+Bank&t=h_&ia=web
The claim was for tax due from a deceased father and seems to have involved “transferee liability”. The bank had to pay out twice: once to the IRS from its NY correspondent and once from Canada to its depositor.

I have raised elsewhere the applicability exception clauses in relation to EU/EEA/Swiss citizens exercising right of establishment in another Member State — a matter for the CJEU in Luxembourg to address, and, should the UK enter into such an agreement, as to Irish citizens who, under the Ireland Act 1949 are not “aliens” in the UK, a matter confirmed by the Good Friday Agreement.

Retroactive tax laws, and, ironically, criminal offenses that depend on them, are more likely to pass judicial muster (human rights, constitutional rights, vested interests) than other laws. But this is not an unlimited tolerance: see Chua v. Canada (Minister of National Revenue)
http://www.uniset.ca/other/css/20011FC608.html

Collection agreements typically limit exemption to persons who were citizens of the requested country at the time the tax was imposed. This can implicate issues of foreign nationality law. I suspect that it is mainly real estate, royalty, trust, pension assets and streams of revenue (including salaries) that are susceptible to seizure since liquid assets can quickly disappear from the jurisdiction.

How prescription (statutes of limitation) and bankruptcy will operate across borders remains unclear. But the IRS will rarely appear in its own name or that of the US Government, in foreign courts since the Harden decision. One risk that the USG takes is that a foreign country might rule that the purported tax debtor is not, in fact, a US citizen or US Person. This is why the conventions appoint foreign tax authorities as their proxies and try to force the litigation of all issues in the US courts. That said, the IRS does not typically bring cases unless it thinks it can win them, so many issues of the sort I’ve mentioned go unresolved.

What I would take away from this discussion is that persons born outside the USA, even if under US law they are US citizens but who have never been documented as such, have little risk. And this is probably so even where the non-US nationality was attributed at a time later than birth because dependent upon some formal act such as consular registration. US laws are frequently written in ignorance or disregard of the conflicts they create, and tax law — with its occasional statutory override of treaties included — is a particular minefield. The kinds of cases raised by Vice Consul Shaw depend on facts regarding residence and presence that are difficult, sometimes impossible, to prove. It is not the IRS that is going to choose such cases and foreign banks probably will not either whatever their FATCA worries.

A final comment: the USG, the Financial Action Task Force and to some extent the OECD have done much to assimilate tax evasion to money laundering, wire fraud, common-law fraud, and terrorist financing. There is a move to include tax evasion in extradition treaties; the current US-UK extradition agreement led to extradition of persons accused of financial crimes (thus: the Natwest Three) and computer hacking (Laurie Love) even when prosecution in the UK was declined. This has implications for the future.

That said, financial crimes are expensive to pursue and the cases chosen to pursue are those involving notoriety, difficulty of the accused to flee to a safer jurisdiction, or large sums of money.